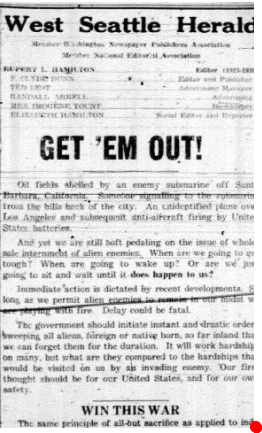 On December 7, 1941 Japan bombed Pearl Harbor, thrusting the United States into World War II. By the dawn of Monday December 8th, the FBI had arrested hundreds of Japanese immigrants, many of whom would spend the duration of the war in jail. These arrests would foreshadow the plight of Japanese Americans on the West Coast for the next five years. In 1944 the Supreme Court put an end to Japanese internment in the case Endo v. the United States.

In this assignment, you'll be exploring historic newspapers to get a true sense of the hysteria and anti-Japanese sentiments in the United States, especially in the Western United States.

Search In These Resources